O.K.; it’s over with. John Smoltz, now officially has pitched for the Red Sox. It wasn’t at Fenway, and of course, that will be another big deal. But, it’s over with.

His outing ended much better than it started, that’s for sure. He lasted five innings, although they had Bard warming up in the bullpen in the 1, 3 and 5th innings. Smoltz retired the last eight batters he faced. Overall in the 92 pitches he threw, he struck out five, walked one.

It was a painful first inning as the Nationals scored four runs on four hits…and they were hits alright. It wasn’t even so much the hits as it was the anguish
and dispair on the poor guy’s face. I felt terrible.  He has so much baseball-passion and it shows. But he does have Tek, and I trust him.

Funny thing about Smoltzie last night: he pitched against a young stud pitcher that was born AFTER John started in the majors. How do you like that?

John Smoltz, of course, is a legend. Having spent his over 20-year career 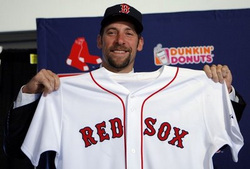 with the Atlanta Braves. He’s an eight-time All Star; Cy Young Award winner; MVP; holds a Pitcher’s Silver Slugger; he’s the 16th member of the 3,000 StrikeOut Club, just to name a few of his accomplishments. He’s only the second pitcher in baseball history to top 20 wins and 50 saves in one season, second of course to our buddy, Dennis Eckersley. He’s the only one to top 200 career wins AND 150 saves. He throws a fastball, slider, high-80’s split-finger fastball, a curve and a change-up.The guy is a beast. And that’s a good thing!

I’m happy to have Smoltzie on our team. When I was in Philly last weekend I was able to witness some baseball magic in action. Smoltz’s last rehab start was rained out Thursday (or was it Friday) and rescheduled for Saturday. After the Saturday rehab game, he must have drove like mad to Philly because I was on the sidelines when he came out to the field, for what was probably the first time in public in a Red Sox uniform. The boys were doing their stretches and when John came out onto the field, everyone stopped and he took center attention. The youngin’s especially, had a glow as they stopped to shake howdy. It was amazing to watch. And right in front of me, no less. 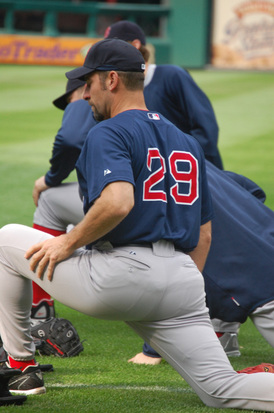 Hopefully everybody in Boston will have some patience. I know I will. I’m very excited to see what he’s got. Location was a huge problem last night but I know the best is yet to come.

Welcome to the Red Sox, John!