I don’t like Matt Garza. Nothing personal. I don’t know why I don’t like him; it’s just me. It’s that magnetic-pull-polar-opposite-thing. He scares me. It’s a vibe thing. It’s all in the eyes. He makes me nervous. To see him set up to pitch against Dice K almost humors me. Talk about no symmetry at all. He’s a heck of a pitcher…throws junk. He mixes his pitches well, too well. He is a lethal weapon on the Rays pitching staff. This was demonstrated especially during the playoffs and the World Series. And he’s their third starter. I don’t like him against our guys. He’ probably a really nice guy. Again, that’s just me. 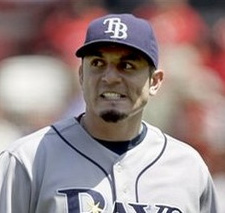 The Rays won this

one. The score was 3-4 with 7 hits by the Sox and 10 hits by the Rays. Garza pitched seven innings. Their bullpen could have blown it but they didn’t. Darn. It was an afternoon game so the teams could travel. Oki stunk. The guys got an ERA of like 18.0 or 20.0 now. Saw Masterson pitch to one batter.

Tek hit a homer. That was cool. Youk is still hot. That I like.

Hopefully the road trip will improve the way the Red Sox are playing.

P.S. I have changed my font. I’m in a change funk lately. I want lots of things changed. Hope you like it.